Panda, the famous Google algorithm update, has been modified once again back in September. Back then Google announced upcoming iteration via its employee Pierre Far on Google+ as follows:

Earlier this week, we started a slow rollout of an improved Panda algorithm, and we expect to have everything done sometime next week.

Based on user (and webmaster!) feedback, we’ve been able to discover a few more signals to help Panda identify low-quality content more precisely. This results in a greater diversity of high-quality small- and medium-sized sites ranking higher, which is nice.

Depending on the locale, around 3-5% of queries are affected.” 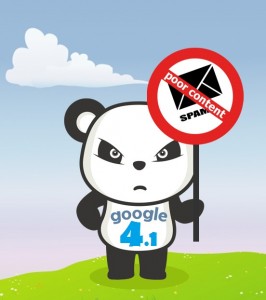 Since then slightly modified algorithm has settled in and its impact proved to be apparent with winners and losers being easily recognized. As always the iteration is aimed against the low-quality content but the perspective of favouring smaller and medium websites with quality relevant content makes it more interesting. And that has been the case so far as those websites are enjoying their unexpected turn in fortune within SERP.

On the other hand there are certain types of websites that have been hit hard by the Panda 4.1. Among those we can classify websites that somehow aggregate their content (“aggregators”), these include lyrics webpages, medical portals etc.

Nowadays the rollout is almost finished and web administrators are able to assess to what extent their search engine presence has been influenced by Panda 4.1 and can take particular actions.

Clients' testimonials
„I would like to truly recommend agency Partnercis, mainly for their professional and intuitive support involving visibility strengthening of our company on Russian and German market.

I, being a perfectionist, am totally satisfied with the work of this agency. I´m glad I can always rely on a team of experienced experts who clearly understand what they day and who are always able to respond to any impulses from the market in a beneficial way for our company. Mutual discussion is very important as well.
I appreciate personal interest of the agency owner on smooth management of all projects and particular campaigns.

I can honestly recommend Partnercis to all who can´t help themselves and who tried plenty of possible alternatives. Partnercis always have an ace up their sleeve : ).“

Ing. Zdeněk Blažek, jr.
marketing manager
Dřevojas, cooperative
„Thanks to our cooperation with Partnercis we have a quality partner who is able to strengthen our websites on foreign markets, especially in Russia. Works that have been undertaken so far really correspond with the investments being made.
Don´t believe unproven providers who have no idea what SEO really entails, offering dubious practices on a daily basis. With Partnercis you have the certainty of a quality service and a good value for money.”
Petr Prokeš,
Project manager in BMT Medical Technology s.r.o.
Internet news