Voice-search has made a huge way in recent years, making its impact apparent especially when it comes to smartphones use. All Google, Microsoft and Apple are continually making considerable efforts to ensure improving quality of the service. Research and development is relentlessly taking place.

Things such as wearable devices are quite common to the contemporary population and voice-search and voice commands will play part in everyday life more often regardless of whether it is via Google, Siri or Cortana. Amount of voice-searches doubled last year only.

These voice assistants are getting smarter and smarter, with some of them already being able to put the conversation in context. Technology itself is continually being improved as well, with the word error rate dropping to 8% from previous 25% from couple of years ago according to Google. Google itself is currently able to recognize up to 58 languages within its voice system. 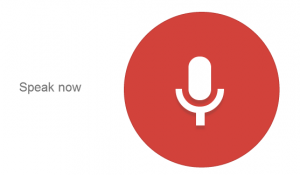 The ultimate goal is to enable users to have a natural follow-up conversation with the device in contrast with robotic automatic responses. One of the technology obstacles still remains the background noise when making voice commands, though much of the improvement have been made on this matter as well.

In any case future is bright for the voice-search and voice commanding, posing the challenge which cannot be overlooked in the near future.

Clients' testimonials
„When it comes to pursuing of our marketing strategy we have decided to implement SEO and PPC. Based on positive references we opted for PartnerCIS as a provider of these services. Already within a first month of our cooperation we recorded positive results which are being performed up to these days as well. For these reasons we can highly recommend PartnerCIS to those who are looking for professional, effective and quickly responding specialist in the field of internet marketing support.”
Alexandr Jernek, M.Sc.
Product manager
kešner a.s.
„I would like to truly recommend agency Partnercis, mainly for their professional and intuitive support involving visibility strengthening of our company on Russian and German market.

I, being a perfectionist, am totally satisfied with the work of this agency. I´m glad I can always rely on a team of experienced experts who clearly understand what they day and who are always able to respond to any impulses from the market in a beneficial way for our company. Mutual discussion is very important as well.
I appreciate personal interest of the agency owner on smooth management of all projects and particular campaigns.

I can honestly recommend Partnercis to all who can´t help themselves and who tried plenty of possible alternatives. Partnercis always have an ace up their sleeve : ).“